A large amount of subsoil, rocks, and materials from demolition of a nearby house, including part of a drain (see photo) and some wall tiles, has been spread over about 50 metres of broad grassy verge. There is a clear trail of mud leading back to the house which had permission to demolish granted last year. The building site has a large hole dug in what is clearly the same kind of soil that has been dumped.

Reported via mobile in the Fly-tipping category anonymously at 15:50, Monday 11 January 2021 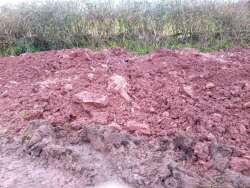 See above. The soil and other waste has been there for a couple of weeks.