Road map
Back to all reports

Branches leaning into road, about 100m past Welton Road, on Somervale Road

Reported via desktop in the Vegetation blocking road or sign visibility - In a residential area category anonymously at 09:04, Fri 22 January 2021 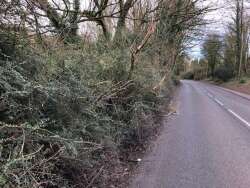 These branches were reported over 12 months ago by telephone but nothing has been done. The branches significantly narrow the road at this point. and when 2 large vehicles pass each other, the road is not wide enough. I experienced this as I was walking on the pavement opposite this point. If this gets any worse it could lead to serious accident. One photo was taken on 18 January (no mirror lens) the other 2 were taken 21 January with numerous mirror lens! This needs urgent attention. In fact the whole of Somervale Road is in need of attention, numerous speed limit signs and 'play park' signs are obscured.