Reported via mobile in the Park safety issue category anonymously at 16:15, Saturday 27 March 2021 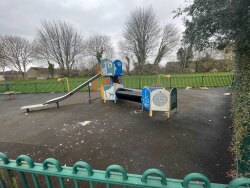 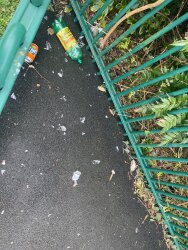 To whom it may concern,

I am sick of seeing the state of the park outside my house, the Ridge Green Close play area.

Most nights it is filled with antisocial boys and adolescents, and this morning I was appalled by the way they left the park. I have attached images of this particular case but I would like you to know it looks like this at least three times per week. My family and neighbours are fed up of clearing up this mess. Not only is this situation appalling, it is also against the law as the boys are gathering here in large groups during lockdown.

I have been away for a few years at university and have been back in my parents home since November, and never have I seen the park so disrespected and violated. Thankfully, the mess does blend in with the neglect and wear of the park...

I would never let my children play here, there is glass, alcohol bottles, old mouldy food, litter, condoms, you name it. I’ve also seen children urinating on and in the tunnel in the park.

At night (or post 6pm as it’s dark by then) when my mum walks to our front door, which is directly by the park, she has to walk by a large group of young men who all are smoking, drinking, staring at her. She is made to feel intimidated on her own door step. Furthermore, my dog is constantly barking as he hears all of the youth out there in the dark late at night. It is not being used to entertain children, it’s utilised to host antisocial youths.

When will the disgusting park be removed as you promised?