Waste dumped over drive and garden

Reported via desktop in the Fly-tipping category anonymously at 10:57, Thursday 8 April 2021 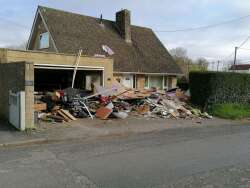 Martins waste management say they were is dispute with a tenant (who departed on 18th march) over an unpaid bill. they keep dumping waste on the drive to the amount owed. they gave their details to the neighbours.