Trimming edges of grass doesn't work if the grass is all weed.

Reported via desktop in the Overgrown vegetation in Council parks and green spaces category anonymously at 16:25, Friday 11 June 2021 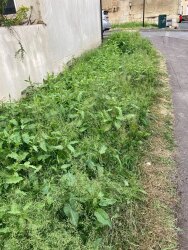 It is appreciated that for the sake of the environment some park areas are only having the edges trimmed, but in the case of Lorne Road, the green area is made up of perennial weeds. Leaving the weeds to grow gives the area an unkempt look and passers by use the area as a litter bin and dog toilet. This last year has really improved the litter problem as the area was mown regularly and large amounts of litter taken away. As for saving time, there were 5 operatives with strimmers that came and trimmed the edges this week. They spent less time strimming than waiting by their truck. The whole area could have been strimmed in that time. It is a shame that the work of last year will now be lost as the area has begun to have litter thrown on it. Maybe pictures over a period of time will prove this. I do look forward to all of the areas along Lorne Road being trimmed properly and hope that it won't return to the sad, slum like state that it was in last year, which inevitably encourages misuse of the green areas. Thank you.