Over grown pavement on Lansdown Rd

Reported via desktop in the Overgrown vegetation in Council parks and green spaces category anonymously at 15:04, Saturday 14 August 2021 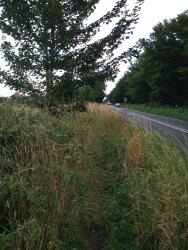 On 2nd July I reported the over grown pavement between the pub at the top of Lansdown and the entrance to Kingswood School playing fields. I was told that the area would be added to a grass cutting programme. I continued using the path for the next few weeks hoping that it would soon be cut. On 12th August my husband walked the path at the end of his volunteering shift at the vaccination centre at the race course. He was dismayed to find that the grass still hasn’t been cut. As you can tell from the photograph the path is now hardly visible. He came home soaked from the knees down from the wet vegetation and had several nasty scratches from brambles that he couldn’t avoid. There is no safe alternative path to walk from the racecourse into Bath and this grass needs to be cut without anymore delay.