Reported via desktop in the Overgrown vegetation in Council parks and green spaces category anonymously at 12:16, Sun 12 September 2021 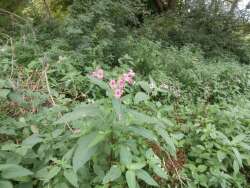 There is a large amount of Himalayan Balsam by the path leading up from Grosvenor Bridge towards the canal. I saw it on the West side of the steps on the path, but there may be more. This is a notifiable invasive species which B&NES has pledged to remove from riverside spaces. It needs to be removed *NOW* before it pings its seeds everywhere and you have twice the problem next year.