Reported via desktop in the Business bins left out early or after collection day category anonymously at 16:20, Mon 29 November 2021 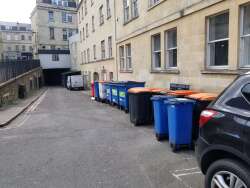 The storage of refuse and recycling bins on the public highway is causing serious concerns and contravenes multiple regulations and legislation.

1. Members of the public may come into contract with broken glass that litters the street and pavement.

2. Evidence of rodent activity is present around the bins which poses a serious health hazard to members of the public and operatives due to airborne and surface bacteria/viruses.

3. Mould and fungal growth is present within and around the bins, again posing a serious health hazard.

4. There is high risk of fire due to the fact that a number of recycling bins contain what appears to be residue from spirit alcohol. This is directly adjacent to other refuse and recycling which includes paper and other flammable materials. Due to the proximity of the bins to the elevation of Eveleigh House, there is a risk that a fire in this location could spread to the building.

5. As the bins contain alcohol, food waste and other refuse, fumes (possibly noxious) are present within the immediate and surrounding areas.

6. The bins are occasionally blown into the street creating a serious hazard to road users.

7. Visibility from the building entrance and from the pavement is significantly restricted creating a serious hazard to pedestrians.

8. The visual appearance of the street and area are negatively affected by the presence of the bins on the public highway.