Reported via mobile in the Obstruction on road or pavement category anonymously at 13:55, Thursday 17 February 2022 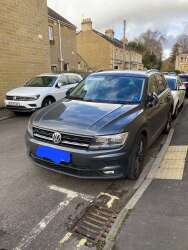