Reported via desktop in the Litter bin full category by Ninon Talote at 17:17, Thursday 15 September 2022 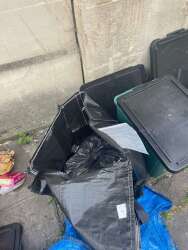 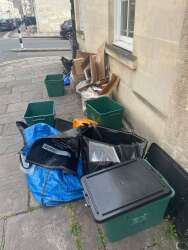 To who it may concern:

We are already several flat owners in the street who complained to the Council...many phone calls that led nowhere. Now we had enough. Half the bins and recyclables are never collected, and is always scattered in the streets after each bin day (not by the seagulls, mind). This is left to rot because people had enough to get their rubbish upstairs. We had maggots, rats, and we end up regularly having to clean it all and throw bins and all ourselves.

We are in Great Stanhope street, it is just as bad in New King street.

We pay council tax just like all the other Bathonians, we are 2min away from the Royal Crescent, still this has been lasting since I moved in in March 2022, and I have been told by other owners, it has been going on for years.

We collectively feel like second class citizens in this city. I used to live in Henrietta street, never ever bins were left uncollected, or half of the content only taken.

We raised this issue countless times to the relevant service and saw no improvement apart from the occasional clean where dirty rubbish were scattered everywhere and caused an issue to the sanitary and safety of the street.

Because it is dirty, passers by throw away random rubbish in the recyclable bags such as bags of dog poos, glasses in blue bags, etc. It is an absolute disaster, and we are all very depressed by the situation.

Half of us at 26 Great Stanhope street, BA1 2BQ, are new owners who moved in over the past year, and we are shocked by the situation for a city like Bath, for the price we paid for our flats, and for the council tax we duly pay every month. Rubbish collection and clean streets is the bare minimum someone could expect from their town.

This is contributing to our street bad reputation, and we are even starting to spot drug dealers.

This is a shame to Bath city.

Thank you for your understanding and hoping for a prompt action on the subject.

This report is now closed to updates. You can make a new report in the same location.