Reported via desktop in the Litter bin damaged category by Moustapha Rahim Kone at 14:51, Thursday 24 November 2022 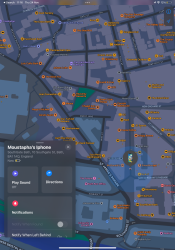 Hey i was found passed outside and taken to the hospital a couple days ago. My phone was gone been able to track it and asked around all the shops in the area if they had seen it. Find my iPhone tells me it’s right on top of the bin was wondering if there is any way it could be open to look for my phone