Reported via desktop in the Abandoned Vehicles/Bikes category by mike killpartrick at 11:33, Tuesday 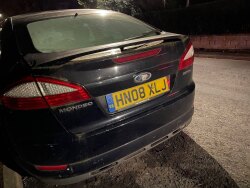 Vehicle appears to have been abandoned, as the near side rear wheel is missing. Previously reported this but strangely received a message saying "we have looked into this matter and found that it doesn't meet our criteria" Don't understand this as with the N/S rear wheel missing it surely has been abandoned? Vehicle has been there for 4 weeks